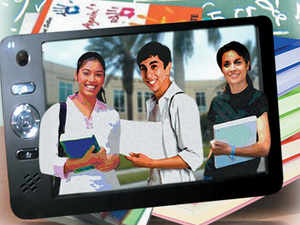 Created for use by students, the tablet will first be made available to colleges at Rs 1,750 apiece ($35) although it costs Rs 3,000 to produce. The difference will be subsidised by the government as part of an ambitious plan to make information and communication technologies an integral part of education.

The tablet, will run on Google's Android platform, withWiFi connectivity for internet access and cloud storage. It will have 256 MB of RAM, a 2GB SD memory card, a 32 GB expandable memory slot and two USB ports.

A Canadian of Indian descent, Suneet Singh Tuli, the chief executive of the company making the device, declined to disclose its retail price, but said it will cost as much as "a vegetarian meal for two at a five-star hotel in Delhi".

Tuli is the founder of Datawind, a UK-based company which also makes the PocketSurfer, a handheld device to surf the web.

"We wanted to show the world when China can break price points, India can do it better," Tuli said.

The cheapest tablets available globally are at about $99 for an HP TouchPad and $199 for Amazon's Kindle Fire. In India, tablets currently start from $99 for Pepper, a tablet launched last month by Devraj group of companies. The Wespro ePad is available at Rs 7,000.

From Laptop to Tablet

HCL Pad based on Android sells for about 10,000. Bharti Airtel and Reliance have also launched tablets priced about 10,000 and 13,000, respectively.

The so-called $35 tablet being made by Datawind is a brainchild of human resources minister Kapil Sibal and a team of technologists from IIT Rajasthan.

The device is being launched two years after it showed off a $10 computer, which turned out to be little more than a storage device.

The $35 device was earlier slated to be a laptop, but it changed its form over the three years it was being created.

The tablet will be assembled in India and the government will waive duties to help minimise the cost of production. One lakh tablets have been ordered initially and about a million pieces will be produced in the next stage if the pilot works well.

The low internal memory, at 256MB, may make the tablet slow in accessing the already slow speeds of internet in Indian colleges. Only about half the 25,000 colleges have been linked to the internet under the government's National Mission of Education. Out of these, less than 15% of the colleges have broadband with speeds of at least 512 kbps.

Earlier, the government had invited an expression of interest from Indian companies, but the tender was issued afresh as earlier vendors were not being able to deliver at the price point which the government wanted.

Gartner analyst Vishal Tripathi said it will be difficult for others to meet the price of $35 for retail sales. "The tablet is largely subsidised. We will wait till launch to give a verdict," he said.

HCL Infosystems first won the tender to make the tablets, but the deal fell through after the company realised that it could not meet the price expectations of the government.

21/09/2011 19:05
Orkut gives you the option to change your profile theme but world’s most popular social networking website doesn’t provide you the ability to change theme of your profile. In one of my my earlier post I gave you the trick to change colour of facebook using Facebook Colour changer. Now I...
All articles
Items: 1 - 1 of 27
1 | 2 | 3 | 4 | 5 > >>
Homepage Site map RSS Print
Website powered by Webnode
Launch your own website for free!
Start here